Why Infosys should not need Murthy And Why Murthy does not deserve Infosys! 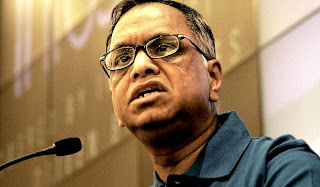 In the past two days, almost everyone is singing rah-rahs about Mr Narayana Murthy getting back at the helm at Infosys, India's iconic technology company. The stock jumped 5% today and timelines are full of platitudes saying how it is such great news for Infosys. I am struggling to understand why is this is so wonderful for Infosys and all its stakeholders? No one is disputing NRN’s greatness or his contribution in creating that wonderful institution called Infosys. No one is taking away from the fact that he was the Chief Architect of the Infosys story - creating jobs for millions of Indians. We all know all of this! This story was written ten years ago. We can’t keep repeating the same fable over and over again. Here is the reality that Infosys faces in 2013:

Since Shibulal took over as CEO, sales and profit growth declined sharply. Its stock has taken a huge knock and so has its reputation. Two popular reasons why – Infosys refused to acknowledge quickly that clients in a slowing world want high quality service at bargain-basement price. Its pigheadedness on premium pricing meant Infosys lost the opportunity to grow fast. Infosys is growing slower than the industry and it expects to do so even this year.

Then there is the leadership issue. Ever since the last of the founders, the soft-spoken Shibulal took over, Infosys has seen a churn at the top deck. Industry watchers say he has neither managed to keep his flock happy nor has he managed to communicate the effectiveness of his strategy to clients. The mistake is strategy or leadership. Analysts say it’s both. And Shibu has not been able to disprove either.

So, this is the mess that welcomes Mr Murthy today. But does Mr Murthy really deserve Infosys?

Here are 6 reasons that he does not:

1. Mr Narayana Murthy was CEO during a different era. In the past three years, the game has changed so dramatically that the Global Delivery Model, mastered to perfection by Murthy and team, now faces a serious threat of survival. The days of so called ‘body shopping’ are over and India’s IT companies are fast finding new models to succeed. Add to this the looming threat of a new immigration law that can prohibit Indian companies from shipping young Engineers en masse from Bengaluru to the US. So why should it need a Narayana Murthy in an executive role to build or execute strategy for tomorrow? Why can’t the management team of today's Infosys fix and re-build strategy?

2. India’s best known banker KV Kamath understands growth and aggressive scaling up like no else does in India Inc. That’s exactly what he did at ICICI Bank and I reckon that’s what he’d have wanted to do at Infosys since the day he became Chairman in 2011. My guess is Infy’s conservatism must have crimped Kamath’s natural penchant for risk and style of functioning. It must have been embarrassing for Mr Kamath to be Chairman of company that sits on 24000 crore of cash and yet shows very little signs of aggression. What is stopping Infosys from making one or two large scale buyouts that can catapult it a new rung of growth?

3. If by all parameters the CEO of Infosys has not delivered, why not find a new man? Pundits say Infosys needs a young, agile, nimble-footed CEO who is able to execute a brand new strategy in the next 12-18 months. Look what Francesco D’Souza has done as CEO of Cognizant overtaking Infosys as India’s second largest IT player this year. Why not a new CEO? If not from outside, why not find someone internally? Why does Infosys need a legend from the past to chart the road ahead of the future?

4. The promoters of Infosys deserve all the credit for making Infosys what it was. But for Infosys of tomorrow, it would serve well if the same promoters cut the umbilical cord and let the company be run by the Board that consists of accomplished professionals. Why should the promoters continue to have a say?

5. When Mr Murthy retired in 2011 – he upheld two important values. That every promoter will quit at the age of 60 and that no family member can inherit leadership roles. By coming back, does Mr Murthy not dilute this rule himself? And by appointing Rohan Murthy as EA to the Executive Chairman, does the Board not lower the exalted standards of corporate governance that this institution has set for itself? Why...wasn’t there anyone else within Infosys capable of being appointed EA? Really? If it is NOT a leadership role, why then make an announcement? When was the last time anyone heard the appointment of an EA included in a press statement?

6. Lastly, what if Mr Narayana Murthy is unable to reverse the slide at Infosys? He is putting at stake his reputation and image that has been painstakingly built over the past several decades. So will the Board want to risk his legacy as someone who built Infosys or as someone who could not arrest its decline? At 66, Murthy could well do without this challenge.

Last word, if this move is about fixing perception than fixing the business, then then the jury’s out if they are going to be proved right on either.